‘The schools function no matter what’

With 27 years of service as a parent volunteer, teacher and school board member, Maria Flores is part of Las Cruces Public Schools’ institutional memory.

Flores is now in her 11th year as a member of the LCPS Board of Education (the other four current board members have about 14 years combined), including three years as president. She has dealt with changes in school district leadership, three governors, multiple state Public Education Department (PED) secretaries, school budget crises and staff cuts, teacher shortages, and growing concern over school safety and health issues that have included the closing of an elementary school because of mold.

“I think the schools function no matter what,” Flores said.

Flores spent 16 years in a classroom before moving to the LCPS boardroom, spending her entire career at Tombaugh Elementary School. She and her husband are the parents of three LCPS graduates – two from Las Cruces High School and one from Mayfield.

“I love the district,” said Flores, who has been a regular visitor to schools across the district throughout her tenure on the school board.

“I’m always enchanted when I go to the schools,” Flores said. “I see children learning every way I turn.”

LCPS has “a lot of young principals. They’re doing a good job. They’re a team.”

Teachers and staff “feel more supported” by the current school board, Flores said. “That’s who I started out fighting for.”

“Maria Flores is the only board member to consistently visit and support our program,” said Gail Wheeler, who teaches at LCPS’ Cross-Roads program for long-term suspended students. “When she is here, she doesn’t walk around looking frightened of the kids; she talks to them and listens to the answers.

“I often see her out in the community, and she seems to be working and paying attention the whole time. She cares about kids and she seems to get it that teachers work better when they are treated well.”

Wheeler became an LCPS substitute teacher in 1992, earned her teaching degree in 1997 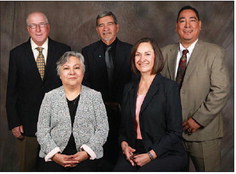 and began teaching fulltime in 1997. She has been with CrossRoads since it opened in 2008.

“There was much good that came with Dr.

Ewing, but in the end, he never got used to the chile,” Flores said of LCPS Superintendent Greg Ewing, who resigned this month and has been replaced by Interim Superintendent Steven Sanchez.

“I look forward to the next adventure with Dr.

Sanchez and the future superintendent.”

Flores said the board doesn’t know what to expect from the New Mexico Supreme Court about a local recall effort targeting her and two other LCPS board members.

The court is considering an appeal by the three board members to a district judge’s ruling that recall petitions can begin circulating.

Complaints raised in the recall effort about violations of the state open meetings act and public records laws are “utterly ridiculous,” she said. If the state Supreme Court allows the recall to proceed, “then let the voters decide. I didn’t do anything wrong.”

Flores said poverty is the biggest challenge facing LCPS, along with adverse childhood experiences (ACES) “that our students are forced to endure. I can make myself cry thinking about my students.”

Flores sees schools as one avenue to address family issues in the community. Sometimes you must “help the parents before you can help the kids,” she said.

That’s one reason Flores supports community schools, which serve as hubs for community services to families.

Here are Flores’ thoughts on other public education issues:

• PED. The LCPS board “didn’t feel supported at all” by former Gov. Susana Martinez. “We were punished on a regular basis. It didn’t matter what we did.” It was “so uplifting” that new Gov.

Michelle Lujan-Grisham chose former Doña Ana County Commissioner Karen Trujillo of Las Cruces as the new PED secretary. “One of our own was going to represent public education in New Mexico. Now I feel downcast about it,” after Trujillo was fired in July. “I don’t know why the governor did what she did.”

• Student testing “should be a measurement of where a student is at a certain moment in time to see if there is growth.” It shouldn’t be used “to rank students or teachers. It’s just a snapshot, not a full view of what a student can achieve. I value time spent teaching, not time spent testing.”

Everyone sees we didn’t get anything back from that.” Student tests are also faulty because there is “no thought for bilingual and English-asa- second-language students.” Extensive testing “broke everyone’s back.

It broke their spirits.”

• School grading is something Flores hopes the Lujan Grisham administration will end. “There are other ways to rate a school that don’t send a message of failure.”

• Teacher evaluations began changing this year to emphasize the input of school principals in the process of rating teachers. That’s a good thing, Flores said.

• School safety. Flores said she “hated chainlink fences around schools” when she was student teaching in East Los Angeles in the 1970s.

“Now we’re back to that here. It’s something I truly dislike and yet I realize we have to do it for our students’ safety.”

LCPS has spent millions to make schools more secure, including fencing, electronic access and central check-in for visitors, and Flores looks forward to the process being completed at every school. “Let’s hurry up and get it done.” The shelter-inplace drills schools now regularly conduct “are scary for children,” and following up on false threats to schools is a distraction. “We’re being forced to do it. It’s even worse since I was in the classroom.” Nevertheless, Flores said, children continue to be safer in school than anywhere else.

• One of her proudest accomplishments, Flores said, has been the addition of a student advisory member to the board. “Students learn; they grow in front of us. We want them to speak up and be involved.”

Flores is also proud that the board has passed “all accepting” resolutions that recognize students of all races, ethnicities and sexual orientations. And she is pleased that LCPS now has health centers at all high schools and at Lynn Middle School, and that the board supports parents and families in the refugee crisis amidst raids by U.S.

Immigrations and Customs Enforcement (ICE) to seize undocumented residents, some of whom had children in local schools.

“I’ve always felt it was an honor to serve and I hope to continue to serve until my term ends and beyond. I’m proud of what I’ve brought to the table. I believe in what I’ve said on the dais.

I’m looking out for our students and teachers always.”

Mike Cook may be contacted at mike@lascrucesbulletin. com. 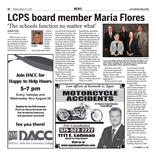