Industry hopes to spread message to cities along I-25 corridor

Even though the production of oil and natural gas is limited to a few counties in southeast and northwest New Mexico, its impact is felt in Las Cruces and every other part of the state, and the New Mexico Oil and Gas Association (NMOGA) wants people to know that.

NMOGA has hired Hatch native and New Mexico State University graduate Fayth Franzoy as its first-ever community liaison in Las Cruces as part of the nonprofit, nonpartisan association’s efforts to be more transparent and more engaged in communities all along the Interstate-25 corridor, Franzoy said.

For many people in the state, oil and gas production tends to be “out of sight, out of mind,” Franzoy said. But, considering its enormous impact on state revenues especially during the boom that’s now in its fourth consecutive year, NMOGA wants to do more to “highlight the benefit we’re able to give back,” Franzoy said.

• New Mexico ranks third in the nation in oil production and ninth among all states in the production of natural gas.

• In 2017, oil and gas production contributed a whopping one third – more than any other industry – of the state’s funding for schools, infrastructure, health care and public safety. And the expenditure of those funds is not limited to oiland- gas-producing counties like Lea, Eddy and San Juan. It reaches public schools and hospitals, cities and counties, police departments and sheriff’s offices in Las Cruces and Doña Ana County and in every community and county in New Mexico.

• New Mexico’s general fund and public schools benefited from $2.2 billion in oil and natural gas taxes and revenues in fiscal year 2018, an alltime high and an increase of $465 million from fiscal 2017, according to a report from the New Mexico Tax Research Institute as quoted on the NMOGA website.

• “Oil and natural gas revenue pumped $1.06 billion in funding for education in fiscal year 2018, supporting nearly $822 million for primary and secondary education, and $241 million for the state’s universities, colleges, and 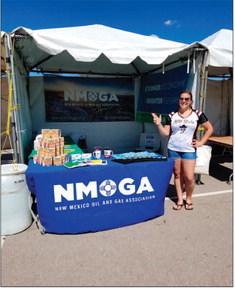 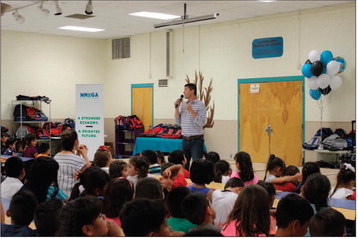 other higher education institutions,” according to the NMOGA website. “That’s an increase of $128 million over 2017 funding levels, or enough to hire more than 2,300 new teachers.”

Franzoy said better technology and improved fracking (horizontal drilling) are largely responsible for the surge in oil and gas production in the state for a record fourth consecutive year.

In September, NMOGA announced a partnership with the Albuquerque Community Foundation to launch the Community Impact Fund, which will award grants to nonprofit and educational organizations in the state focused on science, technology, engineering and mathematics (STEM), economic opportunity and the alleviation of child hunger, NMOGA said in a news release.

Franzoy said she and other NMOGA officials are assessing what Las Cruces and Doña Ana County needs and how NMOGA can be of the most help. Already, it has helped pay for the remodeling of the teachers’ center at Central Elementary School, provided backpacks filled with school supplies to students at Mesilla Park Elementary School and given one of three “ultimate backpacks” awarded to statewide to a student at Picacho Middle School. 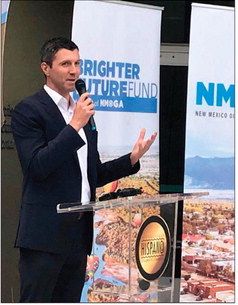 New Mexico Oil and Gas Association Community Liaison Fayth Franzoy, who is based in Las Cruces. 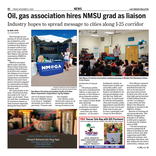