Doña Ana County needs to slow down on PACE

If you got a home mortgage through a local bank, chances are the loan was, sooner or later, sold to a bigger, regional or national bank.

If you’re like me, you never gave much thought to that process.

However, if a proposed Doña Ana County ordinance goes through, all of those local loans and the stability of our economy will be at great risk.

They take a unique approach of a loan being tied to property, rather than a person.

More troubling, the loans are placed in front of other loans, including home mortgages.

For the consumer, that creates a higher risk of foreclosure, which came to fruition when the loans were allowed in California.

For New Mexico, with a more fragile economy than California’s, the consumer risk is higher, because of our lower per capita income.

The risk is also much higher for New Mexico banks.

In 2017, the same question was being discussed among Doña Ana County commissioners. The national financial and home lending community is a surprisingly small community, and just the mere discussion of the topic filled the mailboxes of local banks.

George Ruth, then-president and CEO of Citizens Bank in Las Cruces, received a letter from Cornerstone Home Lending, a Texas mortgage banking company that purchases many home mortgages nationwide. If the county allowed PACE loans, the letter stated, “Cornerstone will have to cease all lending activities in Doña Ana County.”

One of the reasons Cornerstone cited is that PACE’s position of a senior lien in from of the Mortgage Lender would “preclude the sale of the mortgage loan to major Secondary Marketing investors including Fannie Mae and Freddie Mac.”

Thankfully, our county commission at the time voted the ordinance down.

In addition to Fannie Mae and Freddie Mac refusing to purchase mortgage loans with an outstanding PACE loan, neither will the FHA. Since most of the homes sold in Doña Ana County go through those methodologies, having a PACE loan would make it very difficult to sell your property. To me, it’s a pretty big red flag when a federal entity issues a warning like that.

Closer to home, Bernalillo County voted to allow PACE loans, but with significant modifications. First, they only allowed it with commercial property, not residential. Secondly, and more critical, they added a stipulation that the PACE loan could only be made if it were subordinate to the primary lender.

I’m a big fan of renewable energy and hope to one day have solar energy on my home. However, if I were to take out a loan to make it happen, I’d feel a lot more comfortable doing a traditional home improvement loan through my bank, which would certainly make the loan secondary to my mortgage.

In California, where the abundance of PACE loans put a lot of homeowners at risk of foreclosure, some municipalities, such as Kern County, began in 2017 training its tax collectors how to deal with struggling PACE borrowers, according to the Wall Street Journal.

A bipartisan cadre of U.S. senators and congressional members have introduced legislation to protect consumers and taxpayers from PACE loans. Those include senators Tom Cotton of Arkansas, Marco Rubio of Florida and John Boozman of Arkansas, and representatives Brad Sherman and Ed Royce both of California.

PACE loans seem to be the prototype of “seemed like a good idea at the time,” with its goal of helping the average citizen take advantage of the clean and renewable energy movement. When it turned out the loans were going in front of primary mortgage loans, that’s when the problems started to surface.

Do you remember the Great Recession of 2008? Then you may recall it was rooted in the abundance of loans made to lenders who should not have qualified.

The reason these PACE loans have gone in front of primary mortgages is to be able to sign up borrowers who would not qualify for that traditional home improvement loan I mentioned earlier.

Many potential borrowers, however, would have no reason to understand the risks of PACE. If I were not in the news business, I would be in that same boat.

You would think Americans, and America, would have learned the lessons of 2008.

The fact is, a lot of lenders have made a lot of money on PACE loans, and the primary loan position puts those lenders in an unusually advantageous situation. As long as entities are making good money with reduced risk, they’re going to find ways to keep doing it. No, not everyone struggles with the payments, and not everyone will face foreclosure. But why would we want a program that intentionally puts borrowers in such a precarious position? Life is tough, and unexpected things happen that can make payments difficult. For generations, for many Americans, home ownership and home equity has served as the lastchance safety net. PACE puts that at risk.

When the federal lending agencies, U.S. legislators, regional and local mortgage lenders and other New Mexico counties are waving red flags about a process fraught with negative consequences, I think our local county commissioners should pay attention. 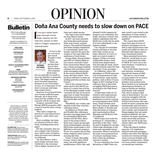