Writer, director and producer Troy Scoughton Sr. said he is excited for this movie to come out and expects it to premiere this year at the Rio Grande Theatre in Las Cruces.

“I wrote this a couple of years ago and it was way too complicated,” he said. “Now I resurrected it, simplified it, broadened it to modern day and it came out pretty good.”

In “Radio Silence” a select team of U.S. Army Special Forces soldiers are sent on a mission to retrieve pieces of a downed spy satellite from a remote desert region 45 miles west of Janos, Mexico. Expecting a routine, even boring, mission, the team comes under attack and is faced with the loss of half their members as well as their Mexican Federal Police escort. Forced to beat a hasty retreat to a cantina they passed on the way in, they spend a long night trying to understand what they are up against and how to defeat this apparently undefeatable (and otherworldly) foe.

“As the story goes, these special forces guys come down,” Scoughton said. “Aliens killed all the rest of their guys. They are holed up in this restaurant they can’t leave because the thing is just right outside waiting for them to come out.”

A young woman, Carmen (played by Stephanie Frias), and her uncle Paco (played by Angel Herrera) own a restaurant south of Columbus, he said, calling it “a pretty cool place.” As a young female in a maledominated society, Stephanie’s character evolves along with the story.

“What is so cool about this is that Stephanie’s character evolves to the point where at the end of the day she is actually the one who figures out how to kill the monster,” Scoughton said. “She is the one that is controlled enough under fire to make that happen. I think it’s really cool because I have a lot of family here, 40 to 50 nieces in this valley. I want my nieces to feel they can take charge in a situation too.”

Scoughton said his goal with PRC Media is to keep creative talent in the area.

“We have all these artistic people coming out of the university and they are so good, but they can’t get work, so they have to leave,” he said. “By doing these independent films here, we employ a lot of very talented local folks and we want to do more of them. “If we make one good one, that’s all its going to take, and then the independent filmmakers will just pour into this area, that’s my goal.” Elva K. Österreich may be reached at elva@lascrucesbulletin. com. 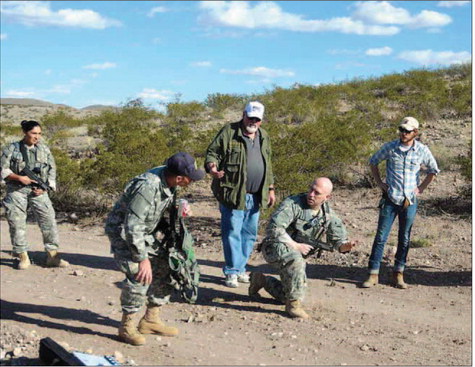 Frank Powers is Sgt Major Bruce Parkman, the leader of an elite troop of U.S. Army Special Forces soldiers who come up against an otherworldly foe in the science fiction action adventure “Radio Silence.”

“Radio Silence” Director Troy Scoughton Sr. shows off the set in the restaurant featured in the movie. 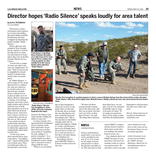