A vocal and passionate group of Las Cruces residents – known informally as La Alianaza, or The Alliance – gathered in front of a church on Tuesday, Dec. 12, to denounce federal immigration policy and demand the return of their friends, displaced Mexican journalist Emilio Gutierrez and his son, Oscar.

The Gutierrezes were detained Dec. 7 by Immigration and Customs Enforcement, ICE, officers, nine years after they first arrived in the U.S. seeking asylum. Emilio Gutierrez’s life had been threatened in Mexico after he wrote articles exposing corruption in the Mexican army.

They have been living in Las Cruces since they were released from ICE custody months after their arrival at the border. Emilio Gutierrez spent seven months in custody, and thenteenager Oscar Gutierrez was detained for two months, despite having entered the U.S. legally as asylum-seekers and not being suspected of any wrongdoing.

Their asylum request has been variously denied and appealed and currently is under further appeal.

“We want Emilio and Oscar released and home now – now,” shouted Jane Asche, who has known Gutierrez for eight years and called the arrest “unwarranted and unjust.”

The father and son were arrested when they reported to the El Paso ICE office for what they thought would be a routine check-in. They were taken to the border for immediate return to Mexico, even though their lawyer had filed for an emergency stay of deportation. The order came in about 10 minutes after the pair was detained – just in time to prevent them from being taken across the border.

Instead of being released, they were inexplicably shuffled between detention centers in Sierra Blanca, Texas; Otero County, N.M., and El Paso.

“ICE is completely out of control,” said Elisa Sanchez, another friend of Gutierrez. “They have power that has been corrupted. They’re playing mind games with two innocent people.”

ICE officials in El Paso did not immediately respond to a request for comment.

Among those speaking at the event – a news conference-turned rally – were Las Cruces City Councilors Gill Sorg and Gabriel Vasquez, who has close family ties to Mexico.

“We are living at a time today when the value of human rights is being desecrated,” Vasquez said. “What has happened to Emilio and his family is a travesty. I want to assure Emilio that the people of Las Cruces support him.” Peter Ossoria, who described himself as a friend of Emilio and Oscar, read a statement from Linda Rivas, executive director of Las Americas Immigrant and Advocacy Center and one the attorneys representing the Gutierrezes.

“Mr. Gutierrez and his son have complied with ICE from their entry to date,” Rivas wrote. “Both men have zero criminal record. Emilio’s detention is indicative of new ICE policies of full enforcement with zero regard for human lives.

Mike Scanlon may be reached at mscanlon999@gamil.com. 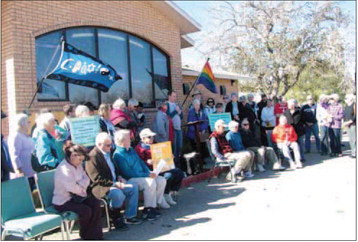 Friends of Emilio Gutierrez, informally known as La Alianza, gather for a news conference and show of support for Gutierrez and his son, Oscar, who has been in federal custody since Dec. 7. 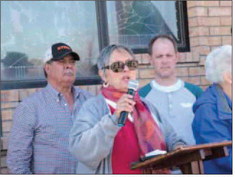 Elisa Sanchez of La Alianza, or Friends of Emilio Gutierrez, speaks at a news conference Tuesday, Dec. 12, at the Unitarian Universalist Church in Las Cruces. The group demanded the immediate release of former Mexican journalist Emilio Gutierrez and his son, Oscar, who have been in federal custody since Dec. 7. 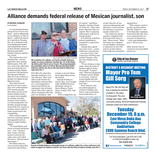