The Mesquite Elementary Sharks in the Gadsden Independent School District were one of eight teams from the Las Cruces area advancing to the 2017 FIRST LEGO® League (FLL) HYDRO DYNAMICSSM New Mexico Region Championship following the November FLL Qualifier at Oñate High School. The championship event is Feb. 10 at Menaul School in Albuquerque.

Coached by Russell Husson-Matter, a secondyear special education teacher at Mesquite Elementary School, the team practices after school on Mondays and Wednesdays, and even comes in on Saturdays, working to hone their robot game skills in advance of the competition.

Not only is the goal of an FLL competition to have fun, but for students to learn leadership skills and how to function in a team, and learn the science, technology, engineering and math (STEM) skills they need to make the robots work.

FIRST LEGO® League challenges kids to think like scientists and engineers. During the build season, each team chose a real-world problem to solve in the project competition. This 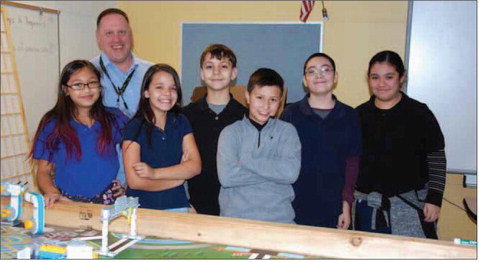 This is the second year Husson-Matter has coached a robotics team that qualified for the state championship and he was witnessed the gains in his former students.

“Confidence levels in their own abilities have risen to new heights,” said Husson-Matter. “Some of my special education students from last year moved on to middle school and are now on the A/B honor roll in general education classes. These students all have the potential for greatness; they just need someone to believe in them, to let them know that they can do anything, and that their contributions to the world can and will make a difference.”

For the project portion of the competition, the Mesquite Elementary team chose a water cycle project centering on how they collect, use, and store water. After observing children drinking at the water fountain, they wondered, “What happens to all the water that doesn’t make it into the kids’ mouths? Where does that water go? Instead of wasting the water, what if it could be collected and funneled into a community garden that would benefit all of Mesquite?” A project like that could impact Mesquite for generations.

Fifth-grade team member Alexandra Rodriguez likes that they are presenting their ideas to help others in the community, far beyond their team and school. Rodriguez said, “Our goal is to work together as a team and accomplish everything together as a team. I’ve learned from my teammates and hope they’ve learned from me.” Rodriguez also liked that the team brings kids together that didn’t know each other before and they’ve formed new friendships.

Mesquite Elementary Principal Angela Silvaggio said the school teams this year have included a blend of special education, general education and gifted students and the “lines are blurred” (meaning you can’t tell which students are which because they all work hard as a team).

“Our female students have realized that STEM programs are not just limited to males,” Silvaggio said. “Our girls have experienced the feeling of ‘yes, I can!’ That is the mindset we want for all our students.”

“For some of our students, the FLL and other programs offered through FIRST could very well be a life-changing opportunity. It could be what inspires them to go to college, to enter a STEM-related field and to help solve the problems in the world that previous generations are leaving behind,” said Husson-Matter.

Husson-Matter voiced his appreciation for the support of his school administration and sponsors Dominguez Farms and Dairies Inc., QED Enterprises Inc., and Ariel Technologies.

“Without the support of these companies and their belief in our program, the success we have experienced over the past two years would not have been possible,” he said.

“I am so very proud of the way students from various grade levels and ability levels come together for a project such as this,” said Mesquite Elementary School Principal Angel Silvaggio. “Our students have learned the importance of teamwork while respecting each other’s diversity.” Contact Husson-Matter at rwhm@comcast.net. Visit www.nmfll.org. 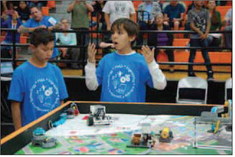 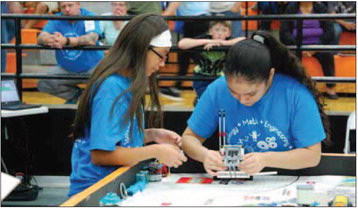 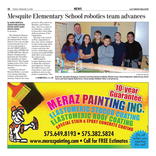